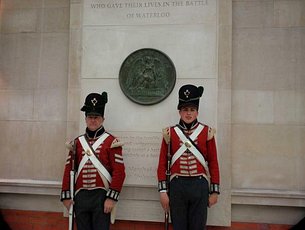 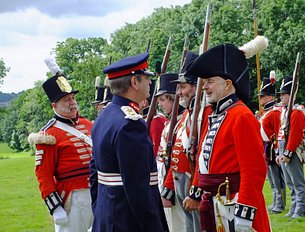 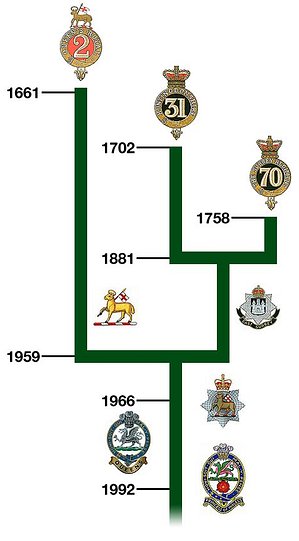 The 2nd Queens through history

The Regiment was first mustered on the 14th October 1661 on Putney Heath. It was formed to garrison Tangiers, which had been ceded to England as part of the dowry of Princess Catherine of Braganza of Portugal when she married King Charles II in 1662. The Regiment was taken into the line as the 2nd Regiment. With this number, the Regiment is the senior English Regiment, the 1st Regiment being the Royal Scots. The Regiment garrisoned Tangiers for 22 years until it was abandoned to the Moors.

The Regiment spent most of the 18th Century in extensive garrison duties in Ireland, Gibraltar and the West Indies. In 1793 it found itself being ordered to Sea! To help the Navy make up for the lack of Marines when the fleet was rapidly expanded on the outbreak of the French Revolutionary Wars. The Regiment served under Admiral Lord Howe off Ushant aboard the Flagship QUEEN CHARLOTTE and in the ROYAL GEORGE, DEFENCE, MAJESTIC and RUSSELL. On the 1st June 1794 the Regiment took part in a Fleet action which became known as the "Glorious First of June". This gave the Regiment the honour of an Infantry regiment being awarded a Naval Battle Honour, the right to have the Naval Crown on their colours, and their Officers the right to take the loyal toast sitting down in the Naval Tradition.

On the 19th August 1808 (2 days after the Battle of Rolica) 731 men of the 2nd (Queen's Royal) Regiment landed at Porto Novo in Portugal as reinforcements for Lt Gen Sir Arthur Wellesley's army which had landed in Portugal in July 1808 and was present at the Battle of Vimeiro, where the French Marshal Junot was defeated.

With the intervention of Napoleon himself in Spain, Oct 1808, the British army, now under the command of Sir John Moore, was forced to retreat to Vigo and Corunna. Here the army embarked on ships for England, but not before a heroic rearguard action by the Queen's Royals, which earned the Regiment another battle honour.

A single company of the Queen's Royals had remained behind in Portugal, and when Wellesley returned to the Peninsula in April 1809 it formed part of the 2nd Battalion of Detachments. The company fought at the Battle of Talavera in July before returning home in August that year. Meanwhile the rest of the Regiment took part in the disastrous Walcheren Expedition, where the army died in their hundreds due to the weather and disease.

In 1811 the whole Regiment embarked for the Peninsular War once more, where it was involved in sieges of various French fortresses. At the Battle of Salamanca in July 1812, the Queen's Royals once again showed their mettle, but lost 109 men. The Regiment was way below strength during the battle and was just 408 strong. By January 1813, the strength of the Regiment had fallen so low that six weak companies were sent home, and the remainder were joined by four companies of the 53rd Regiment to form the 2nd Battalion of Detachments. They were present at the Battle of Vittoria in June 1813, and subsequently took part in the battles of the Pyrenees and Nivelle, and finally in April 1814 the Battle of Toulouse. At the close of the war the companies returned to England, where the Queen's Royals readied themselves for Garrison duty in the West Indies again! Meanwhile Napoleon made a last desperate attempt to regain his former power, but his dreams ended on the field of Waterloo.